Relax in the lush green documenta city
Kassel is located in the center of Germany and can easily be reached from all four directions – by car as well as by train.

Kassel is known internationally as the cultural and economic hub of the state of Hesse , also through the mountain park Wilhelmshöhe, which was declared UNESCO world heritage site in 2013. Another major tourist magnet is the art exhibition ” documenta”, which takes place every five years since 1955. It is one of the most important exhibitions of modern art worldwide. The exhibition lends Kassel its official alias since March 1999: “documenta city”.

Kassel is also known as the “green city”. Not only because of its location near Habichtswald forest, but Kassel also has many green areas in the urban sector, which offers visitors of this big city many attractive recreational areas.

Kassel is the heart of Germany. The present-day metropolis in northern Hesse was first mentioned in a document in the year 913. Landgrave Heinrich of Hesse built his residence here in 1217. In 1866, the Prussians took over control of the principality from Napoleon’s brother. Industrialisation began, and Kassel became the center of the German railway and aviation industries. 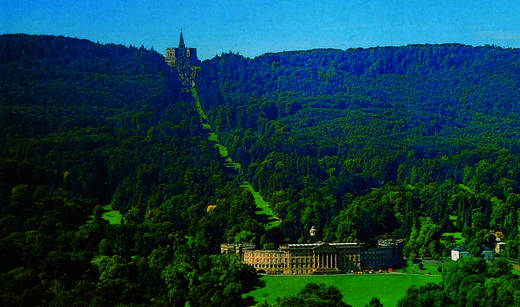 Hercules has crowned the Karlsberg towers over Kassel since 1717. Landgrave Karl had the legend from classic antiquity brought to life here: from the top of the pyramid on the Octagon, Hercules, the mythical hero of ancient Greece, looks down upon the defeated giant, Enceladus, whose head rises from the stone above the cascades, and sprays a jet of water towards his vanquisher. However, the water cannot reach him and flows down the cascades into the valley.

The Grimm brothers lived in Kassel for more than 30 years. “The years spent in Kassel were the happiest in my life,” said Jacob Grimm in 1830. The brothers collected and transcribed fairy tales in Kassel and northern Hesse for six years until the first volume was published in 1812. Would you like to know more about the fascinating lives, creations and works of the brothers Grimm? In the GRIMMWELT Kassel (Grimm World Kassel) the brothers have arrived in the digital age. This new center offers through artistic, medial, and interactive methods, fascinating unexpected insights into the multifaceted works of the brothers Grimm.

Are you athletic, seeking relaxation or simply wish to tune out? If so, then Kassel is just the place for you. For not only is there a big salt-water thermal bath here, and many miles of well-maintained hiking and walking trails through the lush green hills of northern Hesse, but also countless leisure and sports facilities.

In the ice pavillion Aue-Sportpark where Kassel’s “Huskies” regularly celebrate their ice hockey victories, it is also possible to go ice skating yourself. Or do you prefer a round of golf? In the heart of the Habichtswald nature reserve, lies one of the most beautiful golf courses in Germany – the 18-hole course of Kassel-Wilhelmshöhe golf club.

It is also well worth taking time for a stroll through the botanical gardens on Siebenbergen flower Island in the Karlsaue. A pleasure to behold for every lover of flowers! 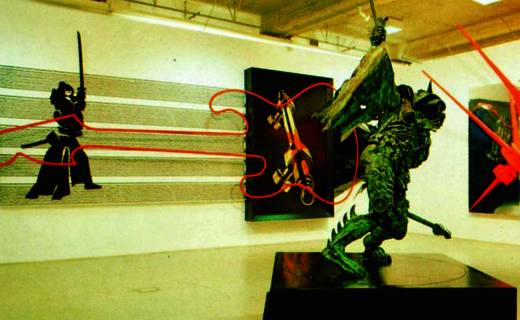 Every five years, the “documenta” attracts art lovers from around the globe to Kassel. Today it is the most important exhibition for contemporary art in the world. Each documenta has had an impact on the cityscape and left behind a legacy – such as the “7,000 Oaks” by Joseph Beuys. Countless documenta exhibits remain in Kassel permanently and contribute to the city’s flair. This allows the works of art to also be contemplated outside of the documenta exhibition times. Claes Oldenburg’s “Spitzhacke” [“Pickaxe”] stands beside River Fulda, the end of the “Vertikalen Erdkilometer” [“Vertical Earth Kilometre”] by Walter de Maria towers into the air before the Friedericianum, and Jonathan Borofsky’s “Man Walking in the Sky” can be viewed in front of Kassel’s KulturBahnhof.